US healthcare ‘to blame’ for poor life expectancy rates 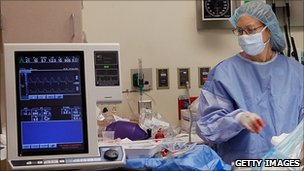 US healthcare reform may save lives and money, the study authors wrote

The US healthcare system is to blame for declines in the country’s life expectancy ranking, a study suggests.

The Columbia University report rejects claims that factors such as obesity have shortened life-spans for Americans relative to other wealthy nations.

The study blames reliance on costly and fragmented specialised care, and calls for systemic reform.

The study notes that in 1950, the US ranked fifth among leading industrialised nations for female life expectancy at birth, but only 46th in 2008.

It finds that US healthcare spending increased at nearly twice the rate of that in other wealthy nations between 1970 and 2002, with the increased spending corresponding with worsening survival rates relative to the other countries studied.

“In most cases, the relative US performance deteriorated from decade to decade,” wrote authors Peter Muennig and Sherry Glied of Columbia University’s Mailman School of Public Health.

They note the countries to which the US is compared – Australia, Austria, Belgium, Canada, France, Germany, Italy, Japan, the Netherlands, Sweden, Switzerland and the UK – all provide universal healthcare coverage.

Factors such as differing obesity, smoking, road accident and murder rates were taken into account in the study.

The US spends far more on healthcare than any other country as a percentage of gross domestic product, the study finds.

“We speculate that the nature of our health care system – specifically, its reliance on unregulated fee-for-service and specialty care – may explain both the increased spending and the relative deterioration in survival that we observed,” the authors wrote.

“If so, meaningful reform may not only save money over the long term, it may also save lives.”

The authors said those aspects of the US health system contributed to unnecessary medical procedures, poor communication between doctors and higher rates of medical errors.

So, apparently it’s not so much obesity but our crap healthcare system that accounts for the US life expectancy.

I haven’t had a chance to read the study, so I can’t say whether the reporting on the results is fair. The study is linked above and here.

« Rethinking Life and Death: Singer’s Five New Commandments
Critical Thinking, or Why The Interwebs Make Me Want to Yell »